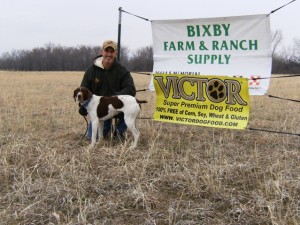 Doug Hardesty and Stormy finished first in the May 9th Gun Dog Trial.

The 2013 TBDA trial season started off well with a day of 12 braces and three puppies in the field. Overall 27 dogs competed for the first available points in the 2013 championship season. In the Open category Doug Hardesty set the bar high with Stormy early in the day. In the fifth brace Stormy found five birds and retrieved all of them for a total of 215 points. After lunch Tom Krause and Pal pulled down a solid second place finish and Jim Anderson secured a respectable third place finish in the second brace of the day. Full results are listed below.

Meanwhile in the puppy field, Tom Alexander and Ace and Jim Anderson and Rosie both found four birds each with good shooting and retrieving giving Anderson the edge for first place with four finds and three retrieves. Roy Marshall finished third with Rocket.

This Saturday the Tulsa A and Tulsa B teams will head to Lebanon, Mo. to compete in the club championship. Drop by next week for the full story and photos of the championship. After the championship, dog work resumes here in Tulsa with the March 23rd Gun Dog Trial at the TBDA Trial Grounds. Online registration is open for the event. 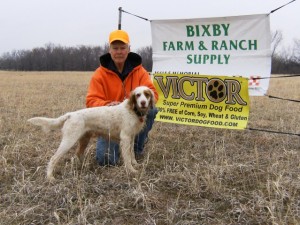