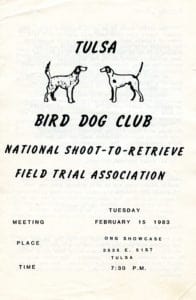 Founded in 1982, the the Tulsa Bird Dog Club was led by president Jerry Myers, vice presidents Joe Minardi and Dean Lenard, secretary Buddy Mickle  and treasurer Karen Dillon. Annual dues were $14 and the club held the first National Shoot to Retrieve Association trial ever held in the Oklahoma region that year. In January of 1983 the first edition of the TBDA newsletter (soon to be named Covey Rise) was mailed to the membership. It has been published and mailed every month since then, informing members of upcoming trials, placements, items for sale and the news of the TBDA and it’s membership. The club would continue to hold NSTRA trials throughout the 80s and into the mid 90s while expanding into American Field walking stakes, Gun Dog trials and more. Jerry Myers held the office longer than any other president; serving six full years before stepping down from the post in 1988. 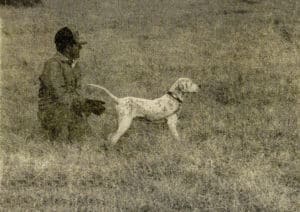 As the club grew and expanded into new venues, membership grew and at one point topped out at nearly 200 paying members. Hundreds of field trials were held during this time under the auspices of the Tulsa Bird Dog Club. Members such as now well-known pros Allen Vincent, Tom Woods and more came and went in their involvement in the club. The club owned horses and trailers, four wheelers and BBQ grills, club houses and land leases, each documented in the Covey Rise. The club has always maintained trial/training grounds and those grounds have been treated as sacred. Currently, the club operates on a piece of pristine prairie owned by Mr. Lloyd Oler in Inola, Oklahoma. We are eternally grateful to him and his family. Previously, the club has operated on various parts of the Whirlpool campus, Zink Ranch, the McFarlin-Ingersoll Ranch and other privately owned land in the Tulsa area. 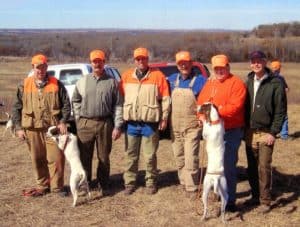 In 1990, the TBDC introduced the Gun Dog trial, a trial format geared more towards hunters using their everyday hunting string to compete in the off-season for bragging rights. A scoring system was put in place to reduce judge subjectivity. The format was fine-tuned and in 1992 the rules were put in ink by long-time club member and officer, Dennis Drullinger. The same year, the club introduced the Oklahoma Gun Dog Championship, hosted first by the Hulah Lake Bird Dog Club. For the 25 years since, the championship has been hosted by a different participating club on a rotation of about four years. Clubs have come and gone, but the championship lives on. In March 2017, the Tulsa Bird Dog Association will host the 25th renewal of the two day event which includes both individual and team awards. 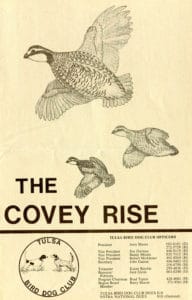 The Gun Dog format would continue untouched until 2015 when officers again fine-tuned the rules to clean up some vagueness and inconsistencies. The spirit of the contest though is intact. Through the years the Gun Dog Trials grew in popularity and the other trial formats were supported by other clubs. By 1997 the TBDC was only running members-only Gun Dog trials.

A New Name and a New Status

In 2011 under the guidance of Roy Marshall and Shane Bevel, the Tulsa Bird Dog Club changed it’s name to the Tulsa Bird Dog Association and applied for 501c(3) status with the IRS. After a mountain of paperwork and countless hours on the phone with the IRS, the status was approved and the club went to work expanding it’s charity work to match it’s new tax exempt, non-profit status. In 2013 the club held the first Youth Outdoor Expo; a large, one day event geared towards getting youth into the outdoors. The event grew greatly over the next few years and now averages more than 200 youth on the second Saturday in August. Outdoor clubs from all over Green Country gather together on that Saturday to give kids a chance to fall in love with their brand of the outdoors.

A Return to Our Roots 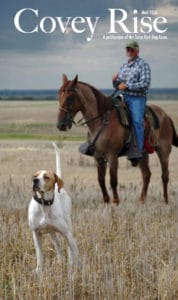 With a couple stellar quail seasons and a renewed passion for growing the membership, the board of the TBDA went to work looking for ways to expand in 2014. One of the realizations was that the NSTRA and American Field walking stakes had dried up and left Green Country since the clubs involvement in the 1980s and 1990s. Members and leadership worked together to recruit new members and volunteers and re-stake their claim in these nationally recognized venues. In 2015, with a keen eye turned towards the continued success of the club’s Gun Dog trials and the Oklahoma Gun Dog Championship, the TBDA hosted it’s first NBHA/AFTCA trial since 1997 at the McFarlin-Ingersoll Ranch. With the help of the Oil Capitol Field Trial Club and Winn Ingersoll, the TBDA’s trial was a success. In 2016 the TBDA hopes to add more American Field events as well as adding NSTRA events to the roster.

In the July 1986 edition of the Covey Rise, then president Jerry Myers wrote the following:

The TBDC is not just a field trial club. It is a bird dog club; in every sense of the meaning. The officer group believes that the success and growth of the TBDC is due primarily to the diverse activities and programs available to the members.

We also think the variety of trials sponsored by the TBDC has fostered this interest and growth. Members can participate in the “members only” club trials; others sanctioned by the National Shoot-To-Retrieve Association (NSTRA) ; or the back course – bird field, walking trials recognized by the American Field and sanctioned by the Amateur Field Trial Clubs of America (AFTCA).

The current board sees the wisdom in those words and is hoping to move the club back to being an inclusive, multi-venue club. The club has come a long way in 30+ years, but has a long way yet to grow. We hope you’ll go on over to the Get Involved section on this website and join us. Be a part of a historic club running timeless games with amazing animals over pristine grounds.