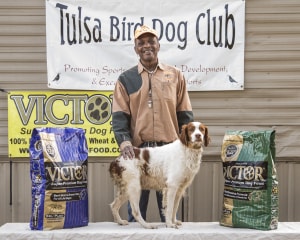 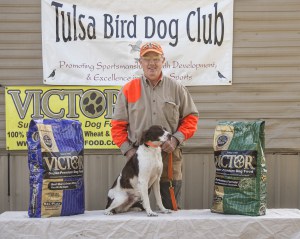 With only one trial remaining in the 2014 championship series, Tom Alexander laid down a score of 192 during a mid-afternoon run in the field and took home his second first place finish of the year with his Brittany, Roscoe. Behind him on the day was Kelley Sample’s Brittany, Hunter, who took home five spots and the lead in the Gun Dog of the Year championship race. Finishing third was Ben Faulkner’s Brittany, Shelley, who is also tied for third in the overall standings.

With one trial left to go, Doug Hardesty again shows that running two good dogs pays dividends in the Handler of the Year standings. His dogs have combined to bring home 26 points and between them have finished in the points in every single trial this year so far. He currently has a commanding 9-point lead over Kelley Sample’s second place effort.

The series continues on Nov. 1st with the final trial of the year. It looks like it will be a exciting day to watch dogs. Runoffs are possible in both categories and the weather is sure to be fine. Get registered now!

A full box score for this week’s trial is here. Full standings in the 2014 TBDA Championship Series are available here.