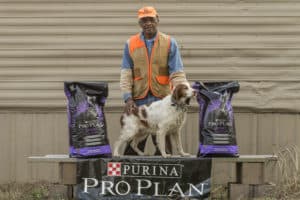 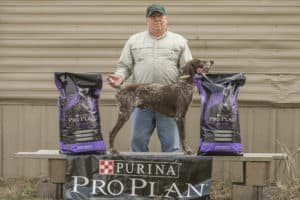 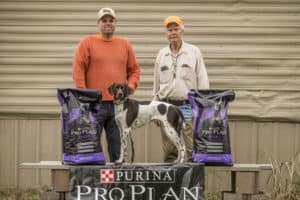 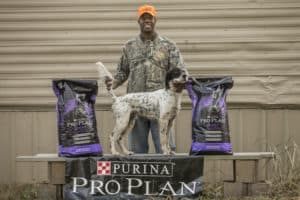 With the opening of bird season just around the corner, the TBDA closed out it’s 2017 field trial season on November 4th at the club trial grounds in Inola, Okla. The weather was cool and wet with fog hiding the sun for most of the day, the end results being much lower temperatures that forecasted for the afternoon. That combined with a moderate number of entries ensured that no one ran in the heat as the evening fell.

A number of dogs made their point that they can still get it done and are looking forward to another great season hunting in the field. These are dogs whose owners have younger dogs and in several cases, much younger dogs. The young guns really showed off their stuff early in the year and looked to have pushed the old guys aside. Not so. Tom’s Alexander’s Roscoe, GSP male, placed first and third the last two trials. Terry Stunkard’s Gunner, GSP male, bested his kennel mate by two championship points, finishing the year very strong, but regardless of the years between them, they both get the job done.

Rusean Hardman’s Chief, setter male, hit a really slow field Saturday but when the sun broke out he was ready and threw down a flawless four birds found, pointed and retrieved for the win with 172 points, Terry’s Stunkard’s Gunner, GSP male, took second with 144 and Tom Alexander’s Roscoe, Brittany male came in third with 129.

Meanwhile over in the puppy field, Tom Krause handled Minnie, GSP female, owned by Preston Smith, to take home a first place. She battled it out with James Parnell’s Roxy. GSP female, who took second followed by Keith Lindsay’s Estell, GSP female, who finished third. You can see a full listing of the results here.

Tulsa Bird Dog Association would of course like to thank out judges, Ellison Gilliland and Carl Brown in the Gun Dog Field and Charlie Hess in the Puppy field. Please thank your judges. Without them these trials simply could not exist. RuSean Hardman chaired the trial with much help from his family. Peggy Hardman prepared an excellent hot meal that was served to all while Ebony Hardman worked hard to make sure there were birds in the field at all times and that everything was ready to go for the handlers. We appreciate RuSean Hardman going to McAlester to get birds. We are, of course, very appreciative of the Oler family who is so gracious with their land holdings in the Inola area and lease the club grounds to us at a very reasonable rate. In addition, we so appreciate the support of Purina Pro Plan as a club sponsor, if you would like a sample of Purina, please contact Shane Bevel or come to the meeting this month, he’d be happy to give you some.

Congratulations to all who participated this season it was a lot of fun. It’s hard to imagine there wasn’t a dog who left the grounds at the end of the day without a smile on their mug. Good luck this winter and hope to see you in the spring.