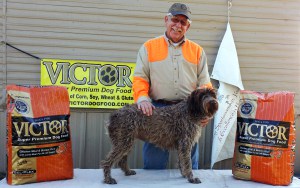 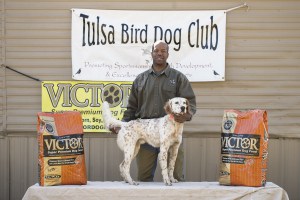 It was a beautiful day to be in the field with a dog! We started the morning out with the first frost of the year and a low in the mid 20s.The cold front not only pushed in cold air, but sucked all the moisture out of the air as well. With a relative humidity starting at 27% and climbing only to 38%, the scenting conditions were tough to say the least! Dogs that worked slow and methodically seemed to rule the day, while those with big motors seemed to not be able to catch a nose full of scent, especially in the morning. But as the day warmed up, so did the action. Bob Dorn took first place for the first time this season with his Wirehaired Pointing Griffon, Sara. Right behind him was Bill Yuan with his Brittany, Chief and finishing third was Doug Hardesty with his German Shorthaired Pointer, Gunny .

Over in the puppy field, RuSean Hardman finished first and second with his English Setters, Duke and Sassy, respectively. Rounding out the points was Tom Alexander and his German Shorthaired Pointer, Candy Man.

Congrats to everyone. We’ll have the Gun Dog, Handler and Puppy of the year posted soon, so keep and eye out!