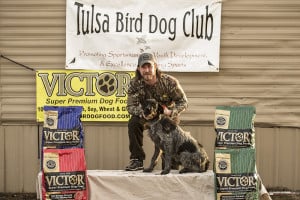 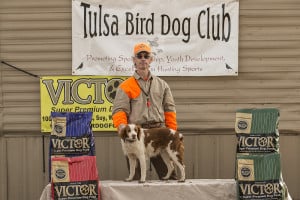 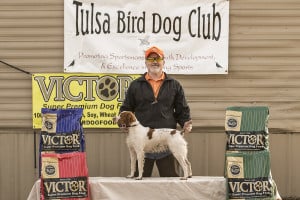 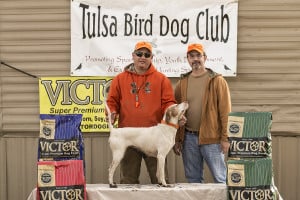 Wow! What a day at the TBDA trial grounds. We sold out our first trial in a few years and it took some hustle on the part of the officers and members alike, but we got the whole trial finished, on schedule.  The club is really rocking and rolling and that was evidenced by a plethora of new faces at the trial this week. Two of those new faces were Joe Blackwood and Kevin Baker, who co-own Fancy, Pointer female. Fancy started them out right by winning the trial with a board-shattering score of 215. Second and third were separated by only three minutes and 34 seconds. Ziva, Brittany female, finished with 172 points under the handle of Danny Green, but her first find at 0:45 is what separated her from third place finisher Brandy, Brittany female. Handler Vernon Seaman signaled Brandy’s first find at 4:09. She continued on to finish with 172 points, four perfect finds.

In the small field 5 pups took to the field early to battle it out. Another newcomer to the trial scene, Bob, Wirehaired Pointing Griffon male, took home first place with a very mature three perfect finds and an addition find with no retrieve under the guidance of handler Lance Standlee. Second place was Sassy, English Setter female, with Rusean Hardman and third was taken by Willie, Brittany male and Mick Gill.

The next trial is March 21st and if this week was any indicator, we will likely sell out, so please get your entries in quickly. The Gun Dog trial is limited to 15 braces. See you then!