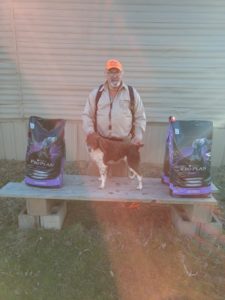 It was a beautiful day at the grounds on Saturday for our first trial of the year. Larry Moore threw down the gantlet with a 144 score in the first brace, which more than held up till the last two braces of the day when the conditions changed with the wind dropping along with the temps a little or the bird build up reached the tipping point, don’t know. But in any case, Ben Faulkner’s Shelly, the old pro that she is, brought it home primarily on her retrieving performance. We all wonder about what effects the scenting conditions, (humidity, wind direction, temp., our dogs state of mind), and we all have our theories but the ones that know, our dogs, just aren’t talking. Competitive trial with a lot of good dog work, the puppies were again impressive with Carl Down’s GSP Dan cleaning the field of five birds and retrieving all of them to hand in the first brace and Bob Dorn’s WH Griffon Bella finding 4 in the 3rd. Only four puppies this trial and several people were wondering where the 18 that ran at this trial last year are hiding. Don’t know that either. Full results are here.

Tom Krause did a journeyman’s job of chairing the event, you could tell it wasn’t his first rodeo, but the real surprise was Tom’s tasty homemade potato salad and baked beans, combined with Bill Yuan’s skill at the BBQ and it was a lunch where you were glad you got your brace in before rather than after.

Phillip Ezell, our new suppliers birds were great flyers. With a gusting 20 mph tail wind they could and did get gone in a hurry if you were a little slow or missing that first shot. So a great day and a very good tune up for the Sho-Me Gun Dog Championship next Saturday, look forward to showing a picture of the trophy next week.

As always, we would not be able to put these trials on without the support of Purina Pro Plan. If you haven’t already switched your dogs to Purina make sure and ask for a 2 lb sample bag at the next trial. We have lots available!