Early morning arrivals for our trial this last Saturday. The trail camera is working. It was surprisingly cold, 29 degrees at 7 am and damp with the roads wet and a thick layer of dew on the grass.

The above photos tell the tale of the day, dirty truck got there early, clean truck came just a little later.

The first four braces each cleaned the field, with Doug Cross’s Ann finding 5 of 6 birds in that first brace. Scenting conditions were so good she just couldn’t take the time to bring a bird all the way back to Doug before she took off again looking for the next one. Yea Doug has done the math and knows he would have run away with it if she had brought them to hand. Just wait till fall, he was heard says, while walking away, proud of his dog, but still shaking his head. With the sun up and wind picked up a little and things started drying out and those scenting conditions got tough. The next four braces started leaving some birds in the field resulting in build up but things were still tight. Rusean and Duece recorded a 144 right at lunch with Doug and Ann’s 140 holding up for second. Everyone else, Tom Alexander and Boomer in 3rd, Larry Naas and Gunner in 4th, Phil Sinor and Athena in 5th, and Mick Gill and Willy in 6th all had 129 scores. Only difference was in the time to the first birds. That’s tight.

Just couldn’t get a much prettier day in N.E. Oklahoma as the above photos captured. I’d like to make a couple points as long as this is our last field trial before summer, one is that every dog has his day. Last week Hardman’s Champ scored 230 points for 1st place while this trial could only peg a 86, while his stable mate Duece blanked last trial and had a 144 for 1st on Saturday. That is a major reason guys run more than one dog.

The other point is dog handling, which is different on the trial grounds than out hunting wild birds. We require that the dog be staunch on point and wait for the hunter, like the photo of Athena below.

This pup, not even 2years old, held this point till Phil walked at least 200 yards. Then continued to hold it when a older dog, Tom Alexander’s Boomer, came in for a classic back.

She sees or senses him there because she lowered herself about half way to the ground but didn’t move a step.

Phil’s good form and practice pays off when he is able to do his part and nail that bird.

In the final “piece de resistance” she brought that bird directly back to hand. That’s teamwork and job well done. In the field hunting wild birds, all those pieces would be nice, but if the dog creeps a step, or only brings the bird to 5 yards away, you will most likely forgive those sins ,if you had a successful day. But if he will duplicate his field trial manners it sure makes for a more satisfying hunt and the reason we play these games.

So spring 2022 trials are done and we are heading into the dog days of summer. I’d like to thank all the members who pitch in to help, it’s what makes it fun. Special kudos to Larry Naas and his Uber Polaris for taking fun hunt people out, Doug Cross for planting our birds. Also James Parnell and Larry for filling in for Doug. Anybody else notice how fast Larry was able to plant with that Polaris, at 30mph you get it done quick. Mick Gill for doing the pairings and some pretty handy computer work. Hats off to Carl Brown and Bob Dorn for judging and having a incident free spring and Rusean Hardman for judging allowing Bob to run his dog. Gene Gray made it to Harp’s and back with lunch right on time. I’d also like to note Purina who sponsors us with Pro Plan dog food for the winners, and as always, to the Oler family who let us play on this small treasure of a property.

We have a general member meeting on Tuesday 3-22 at Billy Sim’s BBQ at the Farm Shopping center at 51st and Sheridan starting @7pm. Look forward to seeing you there. Will give out a heads up when we will be starting our Sunday Shoots at 9am at the Tulsa Gun Club. Never can get to much practice.

Have a great summer and work on those retrieves. 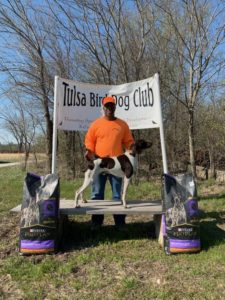